Seo Eun-Soo is the daughter of the chairman of the Jegang Group and married to Anchorman Baek Soo-Hyun. Her father is powerful enough that he wields heavy influence in the political and economic worlds. Seo Eun-Soo is herself a popular miniature artist. She places priority on her family and she tries to never loses her dignity, but she encounters tragedy. Seo Eun-Soo attempts to protect her family. 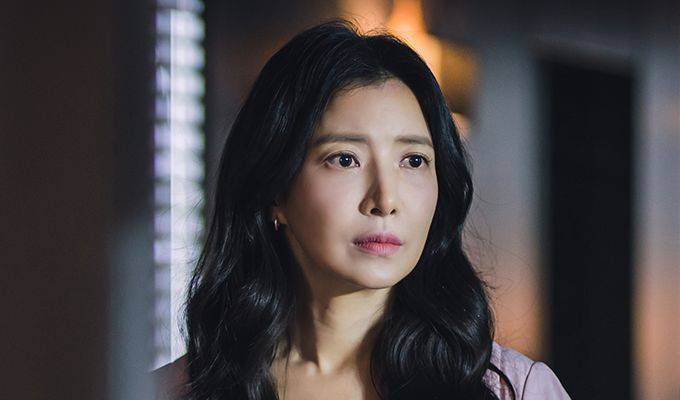 Cha Seo-Young (Kim Hye-Eun) is an announcer for a broadcast station. She has everything, including a prestigious job, exemplary educational background, and a beautiful appearance, but she is rarely satisfied with what she has.

This drama is definitely one of the most underrated gems of the year 2021. I am disappointed at the fact that very less people were watching in real time and not sure whether it'll get recognition now that it's over. I think the cast is the reason but wth; these are all brilliant actors.

A lot of people might consider it's a makjang or chaebol drama for the dark complex synopsis but trust me it's not. It's rather a mystery thriller with a touch of makjang, let's say 30%…? Well again, this drama lives upto the mystery genre.

THE ROAD: THE TRAGEDY OF ONE is about the family, social, political, business and hierarchical affairs involving people of a posh place namely, "Royal The Hill", where top 1% people of South Korea inhabit. This is an adaptation of the famous Japanese thriller novel "Ichi no Higeki" by Rintaro Norizuki published in 1992.

Baek Hyun Soo (Ji Jin Hee) is a famous news anchor with tragic past of youth who holds enormous influence on the netizens that he's built over decades by the means of his work. Married to his enemy's daughter, Seo Eun Soo (Yoon Se Ah), Hyun Soo has always thrived for justice. But as soon as he tries to unmask his own father-in-law, Seo Gi Tae (Chun Ho Jin), things become awry and making everything a mess. On a torrential rainy night a tragic incident takes place and the secrets connected with it result in silence, avoidance, and confusion, which eventually leads to another tragedy.

The Cast is full of veteran actors and in fact, the side characters or minor roles are played by actors with good amount of experience. This fact makes the drama even more interesting even before you start. If cast is the reason the drama isn't getting recognition, man that's an act of foolishness because the cast is very apt and all of them are very skillful actors. They're not just old by ages, also by the time they've spent in the industry. Their performance in this drama is stupendous.

Traumatized by his past Hyun Soo often gets flashbacks of that one horrible day of his teenage that changed his entire life making him run away from everything. Since then, he's always sought escape thinking he can someday finally fix his life but could never reach the end. Eun Soo, a miniature artist, loves her husband and son and can go to any length to protect her family. She's always careful about maintaining her dignity but also has her own insecurities. Chairman Seo Gi Tae of Jaekang Group is very influential and can wield any kinda card to get his work done. Aware of Hyun Soo's intentions, he draws a big picture to prevent his forthcoming downfall. Cha Se Young (Kim Hye Eun) is an announcer and highly ambitious woman who is never satisfied despite owning everything. Her greed and evil motives lands her in many odd situations.

First 2 episodes are honestly kinda slow as well as confusing because it's anyways the introduction of the drama and there are lots of going back and forth in time to showcase the past connections. This particular thing is also included equally throughout the 12 episodes which might be unbearable but flashbacks are very common for individuals with PTSD. Yes, the lead character, Hyun Soo suffers from trauma and goes through frequent flashbacks even after 2 decades.

Story and screenwriting are very good with a steady and definite plot development and harmonic progression. The plot becomes somewhat blunt and boring in the episode 9 but even a major revelation at it's end again picked up my curiosity. Since it's only 12 episode I was a bit scared the finale week (11th & 12th) would be rushed but thankfully it wasn't the case. The destination goal of the drama started unfolding after the 2nd half of the 10th episode and almost everything was crystal clear by the end of 11th hence creating scope for the finale episode to come out smooth. However, I am a bit disappointed with the finale episode. It wasn't exactly bad but the way the writer wanted to end is unusual for a Korean thriller drama. I understand that in real, that also is a possibility and that's evident but still...... The main culprit was revealed in the 12th episode to the audience and everything was explained but...... Idk how to tell this without spoiling. Anyways, not gonna say that they messed up.

Direction ia amazing. All the techniques used to make the drama interesting plus intriguing, yielded good results. Synchronization and linking and of events, pacing and screenplay are very well done. And another important aspect of mystery/crime thriller dramas that's sound editing, is also excellently executed. Intense sound effects with deep background scores make the screenplay more thrilling. OSTs are also good and suit the mood of the drama. Cinematography is something that's been aptly worked upon and the dark aura helps keep the suitable scenario.

"Memories" by Yi Sung Yol is deep, sad and tragic track. "Find the Way" by Jung In is also good.

Again, it totally defines what exactly "mystery" genre should be like. There were lots of revelations in here and till the end there were lots of questions like why, who, how, what, etc that left me astonished. It's very unpredictable throughout because everyone seemed to be possessing some secrets and everyone tried to climb up the ladder and save themselves like crazy. Also, there are few things they had been showing us till the last episode without much explanation but they were eventually made clear in the finale. I started the drama a week before the finale so I thought people would be making theories and going crazy but sadly, coming here I see very less are watching it.

Also, this drama has a bisexual and a lesbian character who are involved with each other but that's not shown in a good light, rather it's another dirty little secret of the story.

This drama deserves a lot more than this and tvN's to be partially blamed too because it seems they're not promoting it well unlike it's other big budget ongoing dramas. I expected it to at least do well in Korea if not internationally but things didn't go well may be, hence making it one of the most underrated of this year. I could have given it 8.5/10 but outcome of last 15 mins was a bit unusual even though it's somewhat realistic.

I know that at this point filthy rich, posh village stories with luxurious group of people, gorgeously dressed women, family secrets, fight for assets things have become old and usual but this drama stands out to be different from the trope because of it's thriller elements and definitely worth the one time watch. So please give it a try keeping in mind that the first 2 episodes might not interest you but trust me, it gets better with each episode.

Watch the kdrama The Road: Tragedy of One (2021) on XeMovie.com