Robot maker, Kronos Heaven, finally develops "Night Tenjo", the perfect male humanoid programmed to be devoted and completely loyal to his lover. The company chooses temp worker Izawa Riiko to take part in a 5-day free trial. At first, Riiko only sees Night as a household appliance. But when she finds out how deep Night's devotion to herself is, Riiko finds herself falling in love with him. Joining the love triangle is Asamoto Soshi, a distinguished young executive at her company who has feelings for her. 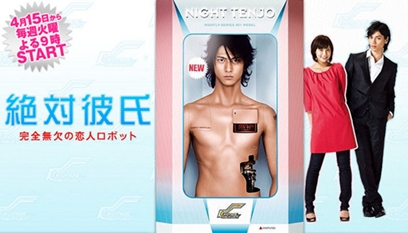 I adore this drama. When i first heard about it I was a bit torn about whether to watch it or not. A human falling in love with a robot? No thankyou. However, I'm so glad I did!

The title speaks for itself - "Absolute Boyfriend" (the English translation). Idealism was precisely incorporated in having an ideal partner including what people really wants from his/her partner. It also showed the reality that nothing stays the same hundred percent. People tend to change including their wants because of their environment and the situation they are into.

Have your tissues/hankies ready at the last quarter of the series.