ABOUT THE MOVIE HITMAN’S WIFE’S BODYGUARD

Michael Bryce is preparing to retire from being a bodyguard and tries to clear his mind on vacation, until Sonia Kincaid tracks him down and asks for his services. She needs his help in recovering her hitman husband Darius, after he is kidnapped by mobsters. After saving him, they are caught by Interpol agent Bobby O'Neill, who needs their help in locating a terrorist mastermind named Aristotle Papadopoulos, who wants to destroy the European power grid and infrastructure since the European Union is planning to impose more sanctions on Greece.

The trio get into more trouble, with Bryce taking much of the physical brunt of their encounters. After getting help from his bodyguard stepfather, Bryce Senior, the trio are captured by Aristotle's henchmen. He has a history with Sonia since he was conned by Sonia even though he genuinely fell in love with her. After turning her against Darius Kincaid, he and Bryce are forced to flee. Senior is revealed to be working with Aristotle and betrays Bryce. 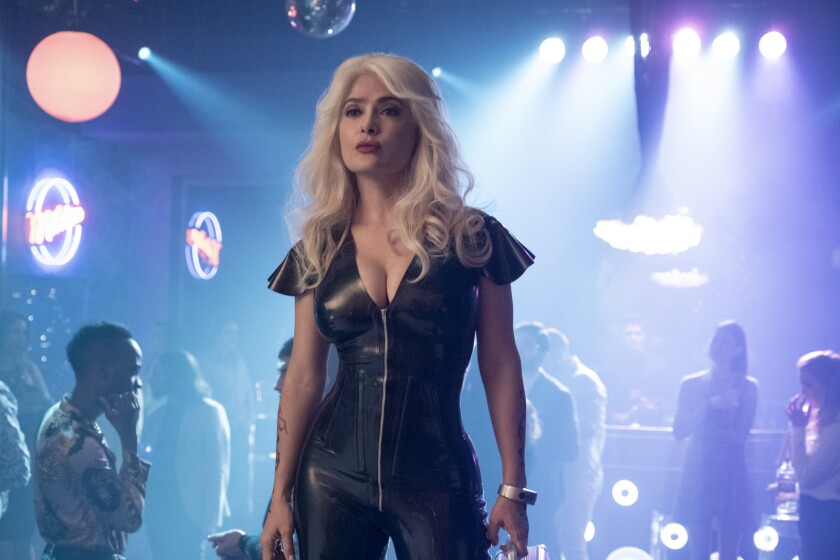 Bryce and Kincaid compose themselves and work together to rescue Sonia and thwart Aristotle. After killing Aristotle's henchmen, they disrupt his plan to use a power drill to break into the European power grid and fight Aristotle and Senior. Bryce kills Senior after telling Senior about his eternal loyalty and friendship with Kincaid, while Kincaid and Sonia kill Aristotle. Bryce manages to hit the manual override to destroy the ship and stop the drill, and the three manage to survive the explosion. O'Neill says they have to stay on the boat for 48 hours together before being cleared and free, then hands Bryce papers to sign which he thinks is his AAA license. Bryce signs them only to find out they are adoption papers for him to be the son of Sonia and Kincaid.

In the mid-credit scene, Bryce despondently jumps off the yacht he is piloting while Sonia and Darius have sex inside.

Ryan Reynolds as Michael Bryce, Michael Sr.’s stepson and a bodyguard-for-hire on mandatory sabbatical which leaves him without the authority to use lethal weaponry.

Richard E. Grant as Mr. Seifert, an old associate of Bryce and a drug addict.

Tom Hopper as Magnusson, a famous bodyguard employed by Papadopoulos

Hitman's Wife's Bodyguard is a 2021 American action comedy film directed by Patrick Hughes and written by Tom O'Connor and Brandon and Phillip Murphy. The film is a sequel to the 2017 film The Hitman's Bodyguard and features Ryan Reynolds, Samuel L. Jackson, Salma Hayek, and Richard E. Grant reprising their roles, with Frank Grillo, Tom Hopper, Antonio Banderas, and Morgan Freeman joining the cast. In the film, suspended bodyguard Michael Bryce (Reynolds) must once again team up with hitman Darius Kincaid (Jackson) and his wife (Hayek) to stop a madman (Banderas) from launching a terror attack on Europe.

Hitman's Wife's Bodyguard was theatrically released in the United States on June 16, 2021, by Lionsgate. The film received generally negative reviews from critics, who criticized the stale humor.

NOW YOU CAN WATCH THIS MOVIE HITMAN’S WIFE’S BODYGUARD ONLINE AND FREE ON XEMOVIE.COM