PLOT OF THE HANDMAIDEN

Sook-Hee is an uneducated girl who is introduced to the maid of rich lady Hideko who lives in an isolated castle with her elderly uncle. Through the process of taking care of the owner, Sook-Hee and Hideko have developed feelings for each other. From here, they begin to reveal their own hidden corners and at the same time have to deal with the lofty intrigue of those around them.

There are three parts in The Handmaiden 2016

The first part is what the filmmaker wants us to think : Sook-Hee and Fujiwara are in on it and are tricking Izumi. But it ends with Sook-hee being tricked and sent to the asylum.

The second part is what Fujiwara is plotting : Izumi and Fujiwara are in on it and plan to trick Sook-hee and send her to the asylum but eventually Izumi and Sook-hee get on the same side and join … hands.

The third part is what is actually going on : This gives us the whole plot in its totality. While initially Sook-hee and Izumi are pegged against each other, they get on the same side and take out Fujiwara and Uncle Kouzuki. 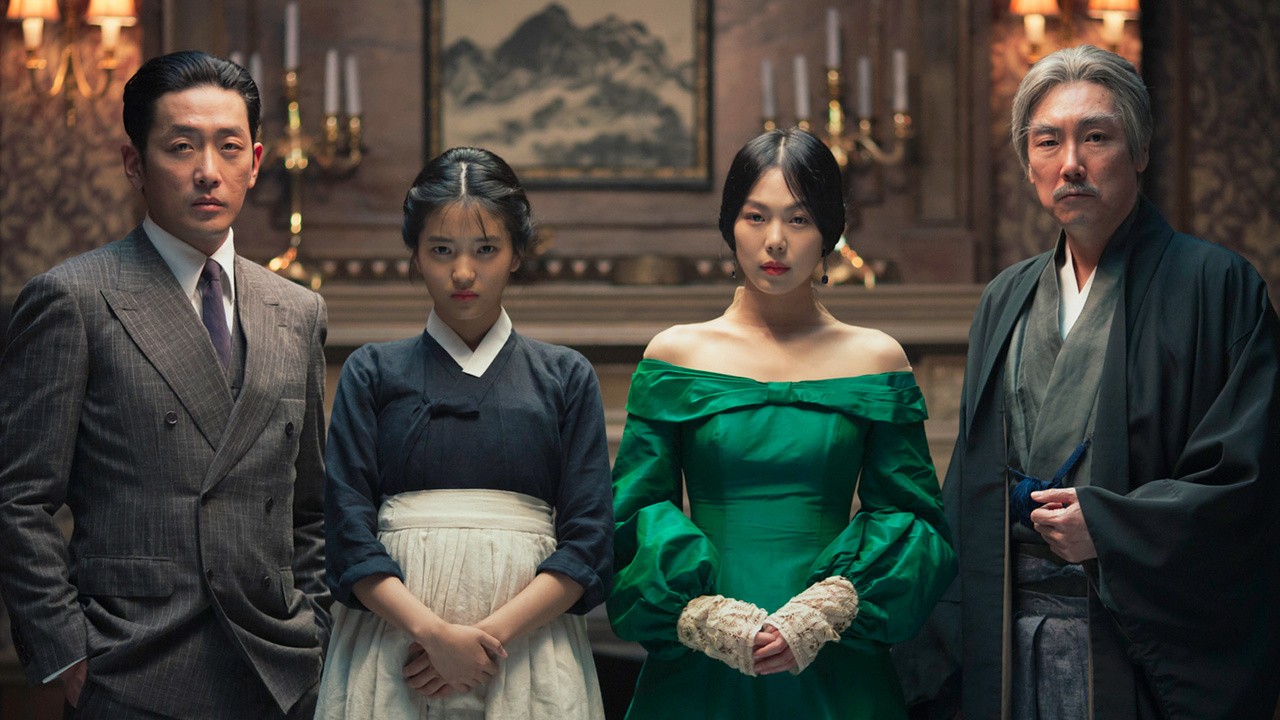 Sook-hee arrives at the mansion playing the role of Tamako, the handmaiden. Izumi is awaiting Sook-hee’s arrival and is spying on her. Sook-hee, on her first night at the mansion, hears Izumi moan in her sleep. Izumi is acting. When she wakes Izumi up, Izumi tells handmaiden about her aunt who hung herself from a cherry tree outside. The next day, Sook-hee hands Izumi her reference letter. Sook-hee cannot read. The letter is actually from Fujiwara. While Fujiwara tells Sook-hee that this would be a reference letter, it is a note to Izumi that she should show all her clothes and jewelry (material stuff) to Sook-hee to make her more gullible. Fujiwara instructs Izumi to act naive but hesitate to fall in love with him. This would ensure that Sook-hee is kept busy with her task of playing cupid. Slowly, Sook-hee and Izumi get close. They share a short intimate moment when she is giving Izumi a bath. This is however instrumented by Izumi. Fujiwara comes over to the mansion and is going to teach art to Izumi. Sook-hee and Fujiwara meet in private to discuss if everything is going according to plan. She tells him how naive Izumi is and the plan is to keep convincing Izumi that she’s falling in love with Fujiwara. At this point Sook-hee doesn’t know that she’s being played for a fool. Here’s the thing. Unfortunately for Fujiwara, Izumi and Sook-hee get too close. They get attracted to each other. They end up making passionate love one night. Now, Sook-hee feels love for Izumi and doesn’t want to go through with the plan. Izumi feels the same way about Sook-hee but when Izumi meets Fujiwara, he tells her that Sook-hee is doing this for the sake of money. Fujiwara and Izumi fake a moment of love in front of Sook-hee. Later at night Izumi tells Sook-hee that she doesn’t feel love for Fujiwara and doesn’t want to get married to him. Izumi hopes that Sook-hee would disclose her love for Izumi. But instead, Sook-hee insists that Izumi should get married to Fujiwara. Izumi slaps Sook-hee in disappointment and heads to hang herself from the tree where her aunt died. Sook-hee stops her and confesses to playing her part in a plan that involved sending Izumi to asylum. She also admits to have fallen in love with Izumi and can no longer go through with the plan. Izumi also admits to Sook-hee about being part of a plan that involved sending Sook-hee to asylum. Both of them confess their love for each other. They also now know that each of them were fitted in a plan that lead the other to the asylum. The two of them decide to take down Fujiwara and Uncle Kouzuki. They start by destroying all of the erotic art collection. 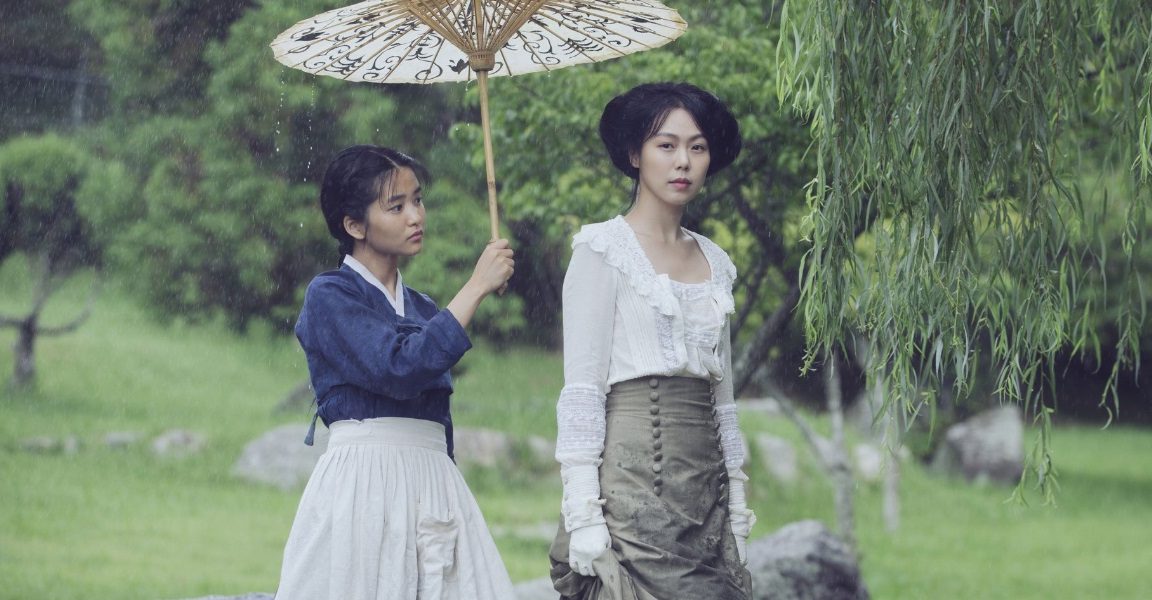 The duo play along with Fujiwara’s plan. Uncle Kouzuki goes out on a trip for a week. He does suspect something and hence warns Izumi that if she runs away, he will kill her like her aunt. Izumi and Fujiwara elope and get married, Sook-hee is also with them. Fujiwara gives Izumi a vile which has highly concentrated opium. He tells her “Three drops will make you sleep all day. Five drops will knock down a horse. If you crave death within five minutes, drink it all. If you carry this, he can never take you to the basement. At least not alive. It’ll be my wedding gift to you. It’s more expensive than jewels”. Izumi and Fujiwara spend the night but don’t have sex. Izumi cuts her hand and drops blood on the sheets as indicative of sex. They cash out Izumi’s inheritance. After this, they head to the asylum. At this point, Sook-hee only acts surprised and creates a scene. Izumi is playing her part too. But Sook-hee has with her a pair of earrings that Izumi calls a gift. The asylum takes Sook-hee in by force.

Izumi and Fujiwara head out for dinner. Fujiwara says that Sook-hee would soon die in the asylum and if Izumi would be interested in getting married to him for real. Meanwhile, Sook-hee escapes the asylum. She uses the earring to pick her lock. In the confusion of a fire she escapes. Izumi seduces Fujiwara and drugs his wine with the opium. He’s knocked out. Izumi leaves and meets with Sook-hee. The two of them decide to use false identities and beat town. Meanwhile, Uncle Kouzuki returns and finds out that Fujiwara has eloped with his “piggy bank”. He sends out a search party for both Izumi and Fujiwara. His henchmen find Fujiwara knocked out at the room. They take him to Uncle Kouzuki. Izumi and Sook-hee flee town. As revenge, Uncle Kouzuki begins torturing Fujiwara by chopping off his fingers. Fujiwara is a man with an insurance policy. Just like the opium drops he gives Izumi, he has three green coloured cigarettes in his case. These are poisoned with mercury. Fujiwara tricks Uncle Kouzuki into letting him smoke those. The cellar doesn’t have any windows. Gaseous mercury poisons them both and they die. The film ends with Izumi and Sook-hee making love to each other in their new found freedom. Jingle Jingle. Sigh.

FACT ABOUT THE HANDMAIDEN

The film is based on the novel Fingersmith by Welsh writer Sarah Waters, with the context changing from the Victorian Era in Great Britain to the period when the Korean peninsula was under the rule of the Japanese Empire. Watch more Korean Movies on Xemovie.com