The small monastery has only one room, where a monk and a monk live and practice. The life of the monk and the monk proceeds with the same regular routines.

In the film, there are many details with symbolic and metaphorical meanings, each viewer will have their own ways of observing and explaining.

The film revolves around a quiet small monastery, floating in the middle of a small lake. The young boy followed his master to pick herbs, a simple life unfolded with the little lessons he was taught by his master.

Then the uncle became a young man. At the end of spring, a young girl followed her mother to the monastery of two teachers and students to ask for treatment. A love affair arose between a young boy and a young girl...

The flow of time, of the seasons is very important to the story of the film. During the spring, the elementary school boy learned about respect for life in nature. The girl appeared at the end of spring. During the summer, the young monk understood what love and desire were. 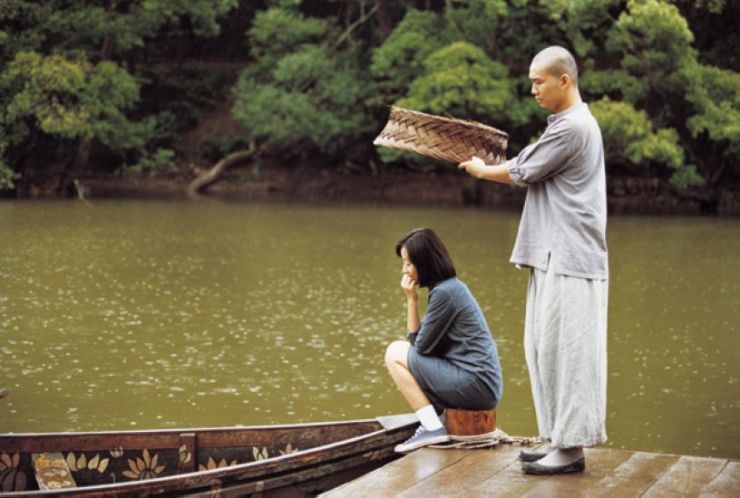 At the end of the summer, the master warned the young boy to control his desires, because there are dangers that come from his own unbridled emotions, but in the end he chose to live in order control ability. In the autumn, the young boy returned to his master after committing a crime, and after that, he had to atone for his sins.

During the winter - the harshest season, the old monk, after paying the price for his crimes, returned to the monastery and began to repeat the image of his own master in the past.

Now, after experiencing the "seasons" in his life, the old uncle has become a really mature person who can really control himself, orient himself, and chart his own path. At this time, the man in the film has become his own master, able to realize many things on his own, to cope with everything by himself.

"Spring, summer, autumn, winter... then spring again" is a film that is said to be a lesson in respect for living things, how love appears, then difficulties, crises appear, until he learned how to overcome everything to become a true monk. All of them seem to be metaphors of each human's life.

We must learn to respect and understand the people, things, and things around us, to understand the dangers that come from our own uncontrollable emotions and desires. discipline to control his body - mind, dare to face and overcome the crises that appear in his life...

And after all, each of us needs to be able to do one thing, which is to pass on what we have learned about life to the next generation.

The film with beautiful footage that is so hauntingly haunting makes viewers look into their own inner self, feel close to the seasons of nature, the seasons in life.

But what's particularly beautiful about this movie is the idea that there's always a way to fix things, there's always the opportunity to start over, to be a better person when a new cycle begins. head.

"Spring, summer, autumn, winter... and then spring again" is a wonderful cinematic masterpiece for many viewers, the film is unique in both visual and philosophical terms, but does not depend on dialogue. The characters. The beauty of the film, the philosophy of life in the film is most beautiful when you let yourself be immersed in the frames, focus on watching and feel the journey "Spring, summer, autumn, winter... then spring again".