ABOUT THE MOVIE PETER RABBIT 2: THE RUNAWAY

The wedding of Thomas and Bea takes place with all their friends, human and animal, in attendance. Peter Rabbit accepts this new part of his life. After the honeymoon, Thomas helps Bea on her children's storybooks based on Peter and his friends. Peter is bit dismayed to know that the books have portrayed him as naughty. Bea then gets a letter in the mail from a publisher who wants to distribute her books. 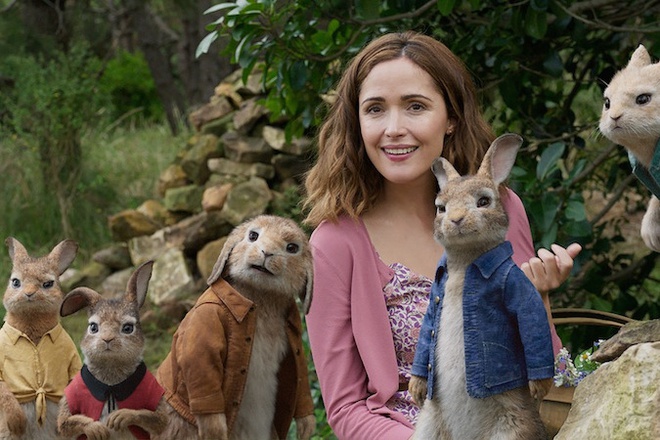 Thomas and Bea take Peter, Benjamin, Flopsy, Mopsy, and Cottontail to meet the publisher, Nigel Basil-Jones. Nigel presents his marketing plan toward the rabbits, which paints Peter as a bad seed. They even see a billboard for a potential Peter Rabbit movie, which makes him look outright villainous. A dismayed Peter walks away from the group and goes into town where he meets an older rabbit named Barnabas. Barnabas recognizes Peter as the son of his old friend, but they are unfortunately caught by animal catchers and taken to a pet pound. Bea starts to sign over the rights to her books to Nigel, in agreement that the books would not be turned into some cash grab property. But it becomes apparent that this is Nigel's plan anyway as he is known for turning simple concepts into something for a more commercial and contemporary audience.

Peter and Barnabas are taken in by a little girl named Amelia and kept in a cage. Barnabas manages to free himself and Peter with the help of his crew: mouse Samuel Whiskers, creepy cat Tom Kitten, and his sister Mittens. They all get away to town with the food after raiding the refrigerator. Thomas and Bea then find Peter and bring him home while Barnabas returns to his hideout.

MAIN CAST OF THE MOVIE PETER RABBIT 2: THE RUNAWAY

Aimee Horne as Cottontail Rabbit. The character was previously voiced by Daisy Ridley in the first film.

Peter Rabbit 2: The Runaway (also known simply as Peter Rabbit 2) is a 2021 3D live-action/computer-animated adventure comedy film directed and produced by Will Gluck, who co-wrote the screenplay with Patrick Burleigh. The film is a sequel to 2018's Peter Rabbit produced by Sony Pictures Animation, and is based on the stories of Peter Rabbit created by Beatrix Potter. The film stars the voice of James Corden as the title character, alongside Rose Byrne, Domhnall Gleeson, and David Oyelowo in live-action roles, and the voices of Elizabeth Debicki, Lennie James, and Margot Robbie.

After facing numerous delays from its original February 2020 release date due to the COVID-19 pandemic, the film was released theatrically by Sony Pictures Releasing under its Columbia Pictures label, first in Australia on March 25, 2021, then in the United Kingdom on May 17 and in the United States on June 11. The film has grossed over $127 million worldwide and received mixed reviews from critics.

NOW YOU CAN WATCH THIS MOVIE PETER RABBIT 2: THE RUNAWAY ONLINE AND FREE ON XEMOVIE.COM