The main character of this movie is a girl named Pron ( Maylada Susri ) who is an employee at a company in Thailand. He likes his coworker who is handsome and secretly popular. He has plans to go to London because his best friend who works and lives there is getting married. Pron is a beautiful but strange girl. He has a habit of panicking himself and he can't even speak Thai fluently let alone English. He likes to run away alone when someone asks him to speak English. That's why when he arrived in London he took English lessons and there was a young Frenchman who was interested in him.

Well, this French guy is a food vendor by car in London and he approaches Pron shamelessly. He is not ashamed to show his love for chasing Pron who is scared to death. Anyway, keep on holding on, that's how this French man approached Pron with the help of 2 Thai men who were in the same tutoring place as them. 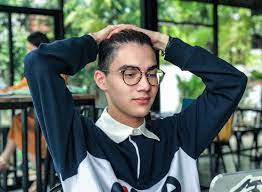 The second love story is a man named Bo ( Chatphong Natthaphong ) who is undergoing LDR with his girlfriend Four ( Atchareeya Potipipittanakorn ) who works in London. Bo is really in love with his girlfriend and in order to meet his girlfriend, he is willing to sell his house so he can go to London. He also couldn't speak English, so when he arrived in London he took English lessons and got acquainted with Pron. Maybe because they come from the same country so they get along pretty quickly.

Bo's boyfriend, Four, behaved a bit strangely, not only before Bo came to London, but before that, making us viewers suspect that Four was cheating on his housemate, a Korean man. Because this Four is really suspicious, he doesn't want to be hugged by Bo, but if it's with the Korean guy, they're really close to hugging. He and the Korean man also often laughed strangely behind Bo's back so it did make Bo think that the two had a special relationship. Moreover, one day he saw Four's hair was wet and the Korean boy had just come out of the bathroom holding Four's bra that Bo had bought him. Which guy doesn't suspect a try. But fortunately, their love story also ends happily in this film. Four's reasons why he seems cold to Bo is also explained at the end, as long as it's simple,

This third love story is about a Thai man named Jude ( Best Nathasit Kotimanuswanich) who came to London with the excuse that he wanted to have a Caucasian girlfriend. He also doesn't speak English fluently, so he takes lessons at the same place as Pron and Bo. She is a French guy friend who has a crush on Pron and supports the French guy, trying to create opportunities. He works at a Thai restaurant in London and is attracted to a cook there. He often bothered the cook, invited him to talk but was always ignored. Even so, he didn't give up at all. Until finally the girl felt that Jude was annoying and it interfered with her work. Later in the end, Jude found out the reason why the girl was always indifferent to him, it was because the girl couldn't speak and hear, and she felt Jude was mocking her shortcomings. But Jude was already in love with him,

This fourth love story is the love story of Pron's friend, Pen ( Sireeporn Yuktadatta ) who will marry an English man named Michael. Their love story also started earlier than the other 3. When Pen lost his scarf in the wind, the scarf fell on Michael's face who was cycling at the time and caused Michael to fall and get injured. Michael at that time went to the clinic where Pen worked. That's where the introduction of the two began until Pen finally found out that it was the scarf that brought them together and fate was also great because both of them turned out to live in the same neighborhood, neighbors like that.

They were both ready for the wedding because of that Pen invited Pron to London. But when Pron arrived, Michael had broken his arm so the wedding was postponed for about a week. During that week problems happened to Pen and Michael. It actually has something to do with Pron who is allergic to English, Pron often runs away when Michael is around and that makes Pen and Michael fight like that. The two of them even broke up and made Pron feel guilty. But if the name is a mate, yes, there is something that can make them separate and unite again. Fate again makes Pen's scarf fall on Michael's face who is cycling and again Michael breaks his leg and goes to the clinic where Pen works. But this time Michael didn't delay anymore, he immediately proposed to Pen there with an awwwww ring, so sweet banged you know or not.