ABOUT THE MOVIE JOJO RABBIT

During the collapse of Nazi Germany in the fictional city of Falkenheim,[a] ten-year-old Johannes "Jojo" Betzler joins the Deutsches Jungvolk, the junior section of the Hitler Youth. Heavily indoctrinated with Nazi ideals, he created the imaginary friend Adolf, a buffoonish Adolf Hitler. Though a fanatic, at a training camp run by Captain Klenzendorf, he is nicknamed "Jojo Rabbit" after refusing to kill a rabbit to prove his worthiness. Pepped up by Adolf, he returns to prove himself, throwing a Stielhandgranate by himself that explodes at his feet, leaving him scarred and limping. His mother Rosie insists to the now-demoted Klenzendorf that Jojo still be included, thus he is given small tasks like spreading propaganda leaflets and collecting scrap for the war effort. 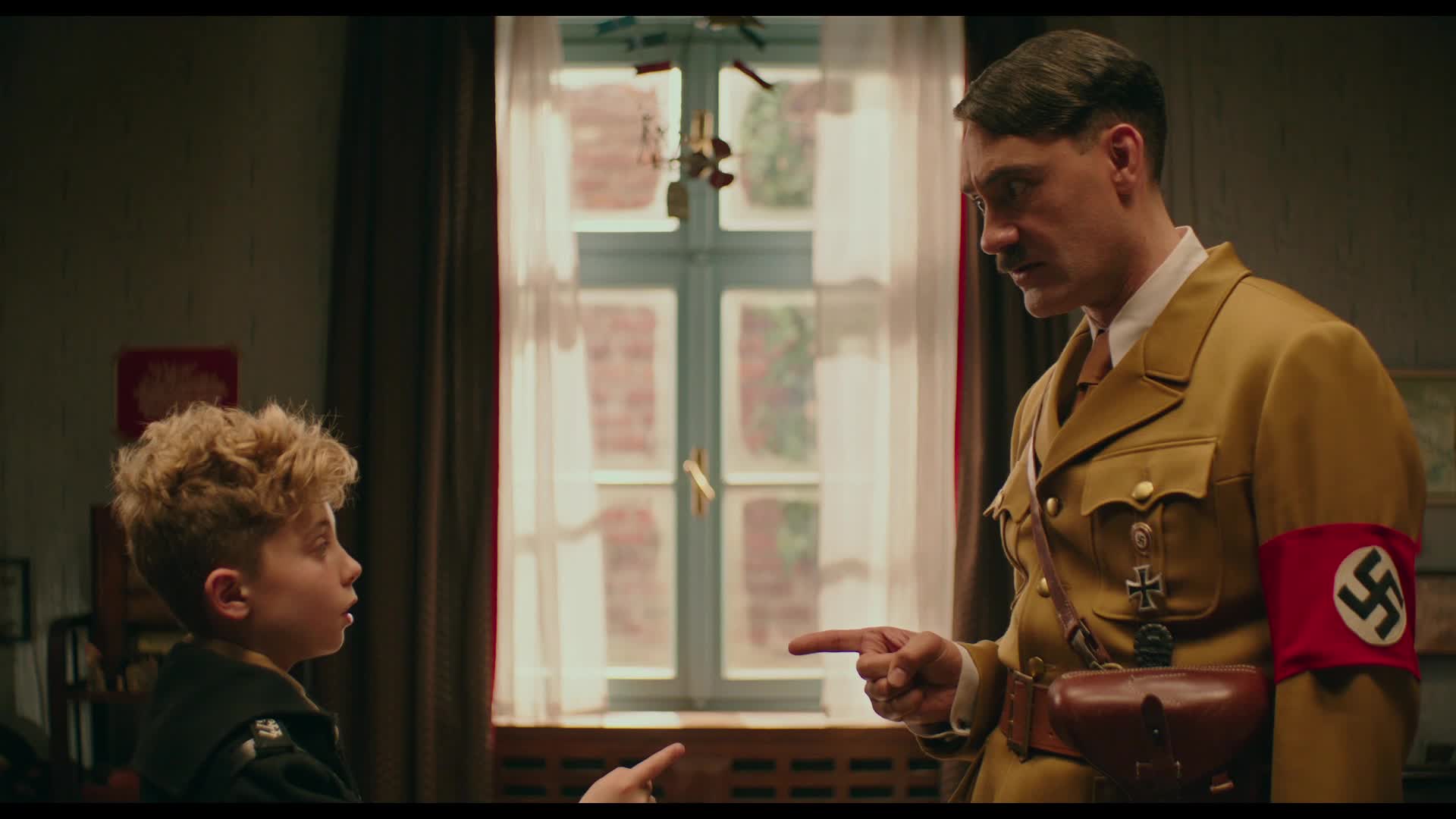 Alone at home one day, Jojo discovers Elsa Korr, a teenage Jewish girl and his late sister Inge's former classmate, hiding behind the walls of Inge's attic bedroom. Jojo is both terrified of and aggressive towards Elsa. The two are left at an impasse, as the revelation of Rosie hiding Elsa would lead to the execution of all three of them. Inspired by an offhand rant by Klenzendorf, Jojo continues to interact with her to uncover her "Jew secrets" and make a picture book titled Yoohoo Jew,[b] so he can "expose" the Jewish race, allowing the public to easily recognize her kind. Despite this, he finds himself clashing with innocence, and starts forming a friendship with her. Elsa is both saddened and amused by Jojo's beliefs, using surreal antisemitic canards to challenge his dogmatism. Jojo slowly becomes infatuated with the caring and engaging Elsa, frequently forging love letters from her fiancé Nathan, and begins questioning his beliefs, causing Adolf to scold him over his diminishing patriotism.

Roman Griffin Davis as Jojo, a young German boy who is a member of the Deutsches Jungvolk

Thomasin McKenzie as Elsa, a Jewish girl whom Rosie hides in her home

Scarlett Johansson as Rosie, Jojo's mother who is secretly anti-Nazi

Sam Rockwell as Klenzendorf, an army officer who runs a Jungvolk camp

Rebel Wilson as Fräulein Rahm, an instructor of the League of German Girls in the Jungvolk camp

Alfie Allen as Freddy Finkel, the second-in-command to Captain Klenzendorf

Archie Yates as Yorki, Jojo's best friend and a fellow member of the Jungvolk

Jojo Rabbit is a 2019 comedy-drama film written and directed by Taika Waititi, adapted from Christine Leunens's 2008 book Caging Skies. Roman Griffin Davis portrays the title character, Johannes "Jojo" Betzler, a ten-year-old Hitler Youth member who finds out that his mother (Scarlett Johansson) is hiding a Jewish girl (Thomasin McKenzie) in their attic. He must then question his beliefs while dealing with the intervention of his imaginary friend (Waititi), a fanciful version of Adolf Hitler with a comedic stance on the politics of the war. The film also stars Sam Rockwell, Rebel Wilson, Stephen Merchant and Alfie Allen.

Waititi crafted the screenplay in 2011, a year after his mother described the premise of Caging Skies. He rewrote the first draft, which as a rough adaptation of the dark-toned source material did not contain much comedy; it was also in the rewritten version that Adolf's character was included. Waititi recalled the pitching process as exhausting. In 2012, it landed on the Black List, where it remained in a development limbo until several years later when Fox Searchlight Pictures showed interest in it. A tight casting schedule started in 2018, and the film started principal photography in the Czech Republic in May 2018, finishing two months later. While the film underwent post-production in New Zealand and the United States, Michael Giacchino composed the film's score in London.

NOW YOU CAN WATCH THIS MOVIE JOJO RABBIT ONLINE AND FREE ON XEMOVIE.COM